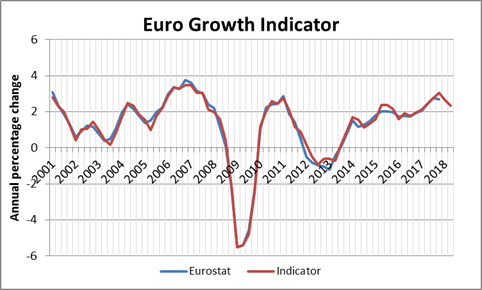 Economic momentum in the euro area seems to have peaked

The deceleration of growth in the first two quarters of this year apparent in the Indicator is mainly due to a substantial deterioration of sentiment in the industrial sector, which affects the Indicator coincidentally. Lower confidence of private households, entering the Indicator with a lag of one quarter, has also contributed to the reduction of the growth estimate, although to a lesser extent. The evolution of the foreign exchange rate (lagged by two quarters) continued to give a small negative contribution to growth, while construction survey results (lagged by five quarters) continued to impact on the Indicator positively.

All in all, the April 2018 Euro Growth Indicator casts a shadow on the benign outlook for the euro area economy, which over the past months had been consistently upgraded by most forecasters. While the extent of the slowdown in the economy may be exaggerated to some extent by the Euro Growth Indicator as the expansion has been overestimated, especially in the fourth quarter of last year, the decline in the Indicator is clearly a signal that growth momentum in the euro area has peaked for the time being.