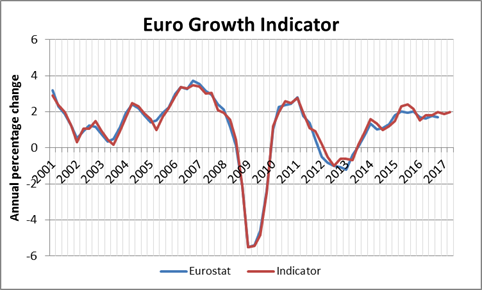 The euro area economy has started the year on a strong note but is expected to slow to a more moderate pace of growth in the months to come. The April estimate of the Euro Growth Indicator calculated by EUROFRAME forecasts 0.7 per cent growth in the first quarter 2017 and 0.4 per cent in the second quarter, more or less on par with the growth registered by Eurostat for the second half of 2016. The Indicator estimates have been slightly lowered from March by close to 0.1 percentage point in each quarter.  On a y-o-y basis this would translate into growth of 1.9 and 2.0 per cent in Q1 and Q2, respectively, almost unchanged from the rates achieved in the final quarter of 2016.

One of two major factors behind the expected slowdown in the quarterly growth from the first to the second quarter is a moderation of sentiment in the industrial sector, which gives a slightly negative contribution in Q2 following a substantial positive contribution in Q1. The other significant factor is the impact of construction survey results, which enter the indicator with a long lag of five quarters. The modest downward revision of the indicator estimate from last month is predominantly explained by developments in the industrial sector. Currently household surveys suggest little momentum from the consumer side, whereas the contribution from the euro exchange rate on the indicator is positive for the first two quarters.

All in all, the April Euro Growth Indicator suggests that the strengthening of the upturn in the euro area that apparently took place in the first months of this year is going to be temporary.  Growth seems rather to return to the more moderate underlying rate of growth that has characterized the economic expansion for the last 2 ½ years. Higher energy prices are eating into household disposable incomes, and political uncertainties connected to the decision of the United Kingdom to leave the European Union may contribute to the less upbeat sentiment in the industrial sector as does a more sober evaluation of prospects for a substantial economic stimulus in the US, after the first months of experience with the new government.