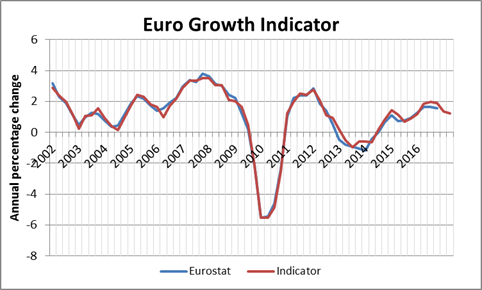 Moderate pace of growth in the euro area

Growth in the euro area is maintaining a steady but moderate rate of growth in the first half of 2016, according to the April estimate of the EUROGROWTH Indicator calculated by the EUROFRAME. The indicator forecasts 0.3 per cent growth in both the first and second quarter of this year, equal to the quarterly rates published by EUROSTAT for the third and fourth quarter 2015. The indicator estimates have been virtually unchanged from the March estimate.  Reflecting the continued moderate growth momentum growth on a y-o-y basis should slow from 1.6 per cent at the end of last year to 1.2 per cent in 2016Q2.

The main support for growth currently comes from private consumption with a robust positive contribution from the household surveys. At the same time growth in the first quarter is dampened by a significant deterioration of sentiment in the industrial sector in the beginning of the year.  The negative contribution of this component remains in the second quarter although to a somewhat diminishing degree. The positive contribution of the real euro/dollar exchange rate (lagged by 2 quarters) to growth which has pushed the indicator until the end of 2015 has faded in the first quarter and is recovering only slightly in the second quarter. The estimate for GDP growth in the second quarter remains steady at 0.3 per cent as the upside from a smaller drag from industry and a modest stimulus from the exchange rate is erased by somewhat less bullish sentiment in the household sector and a drop in the contribution of the construction survey which enters the indicator with a long lag of 15 months.

All in all, the euro area economy looks to remain on its path of a relatively sluggish recovery. Supportive elements such as the low oil price – mainly reflected in robust consumer sentiment – and low interest rates are counteracted by detrimental forces, including uncertainties with respect to the outlook for the world economy, especially emerging markets, and imponderables related to the legacy of the euro crisis.