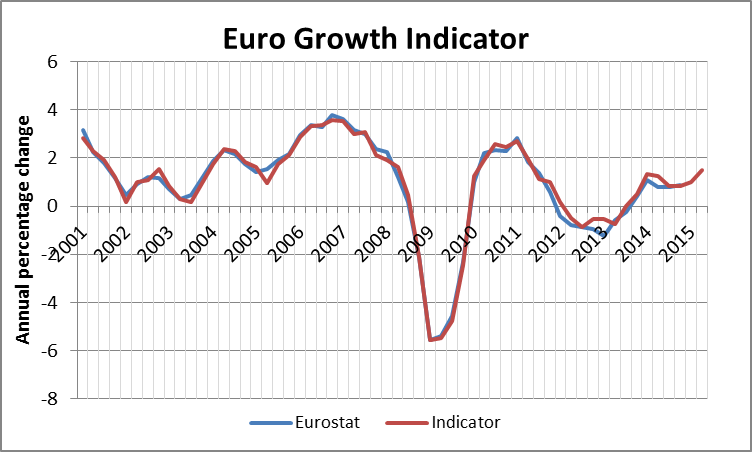 A chance for a recovery in the euro area

According to the EUROGROWTH indicator April estimates, euro area GDP growth will accelerate from 0.3 percent in the fourth quarter of 2014 to 0.4 and 0.5 percent, respectively, in the first and second quarters of 2015. The April estimates are 0.1 percentage point higher for each quarter than in March, which signals that the momentum of the components is getting slightly stronger. On a year-on-year basis, growth should significantly accelerate from less than 1 per cent in the last four quarters to 1 and 1.5 per cent, respectively, up to mid-2015:  the euro area economy seems to recover at last.

Although some serious problems are still unresolved, i.e. the Greek issue or the conflict with Russia about Ukraine, good news should support positive developments of the euro area economy. Private consumption will benefit from the drop in energy prices since last summer which will increase real disposable income as a result of lower inflation. Households are strongly aware of this change in their environment: the rebound in the consumer confidence indicator brought back its contribution in the indicator close to historical levels, suggesting a strong pick up in consumption in the first half of 2015. The extent of the drop in oil prices is dampened by the depreciation of the euro against the dollar, which started in the middle of last year, but Eurozone external demand will benefit from the resulting improvement in competitiveness. The exchange rate contribution is expected to drive upward the indicator results in the first half of 2015 with a two-quarter lag. The construction survey also contributes to better prospects. Positive factors are counterbalanced by mixed signals emerging from surveys in the manufacturing sectors. Although increasing in March, the business climate in industry still depicts less favorable developments than the other indicator components. As a result, the manufacturing survey contribution does not pick up in the first half of 2015 which may suggest that higher private consumption could be satisfied by higher imports and negative change in stocks, at least in the very near-term. The positive impact on activity of increasing demand would then be smoothed over few quarters.

All in all, the EUROFRAME indicator suggests that the Euro area economy could be close to a recovery. The situation has never been so favourable in terms of external and internal conditions for four years. Furthermore, the ECB’s decision to implement massive quantitative easing measures is also going to help the recovery, although the efficiency of such a strategy is still in question, especially regarding the impact of lower interest rates on investment. The only tangible result of the ECB’s policy up to now is the depreciation of the euro which is expected to stop the worrisome trend toward deflation in the euro area.