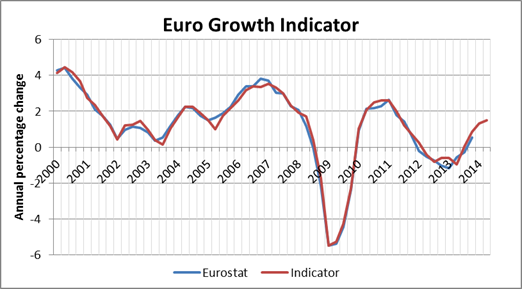 Recovery in the euro area

The improvement in short-term growth prospects is driven by a strong turnaround in confidence indicators starting from late 2012, especially in industry. By mid-2013, assessments on production and order books had recovered their late 2009 levels, when GDP grew by nearly 0.5 percent q-o-q. This holds true also for the turnaround in the household survey which has been substantial in 2013. The consumer confidence indicator has already passed its 2011 peak, despite the poor situation on the labour market and the still high level of unemployment at near 12 percent. However, households may be highly sensitive to the stabilization of unemployment. A minor role has been played both by the real euro/dollar exchange rate and the construction survey so far, with little contributions to the indicator’s forecasts.

As a consequence, the recovery signal which has been anticipated for several months by the indicator is getting stronger although the expansion path has been somewhat overestimated regarding the latest quarter official growth figures. However, the indicator gave the right signal for the end of the euro area recession in 2013 which became effective according to national accounts.

Hard data available so far for the 1st quarter of 2014 signal an improvement of the euro area economic outlook. Production in the manufacturing sector in January is higher than the average of the fourth quarter of 2013 for main euro area economies and industrial new orders experienced a strong increase in Germany last February, largely higher than expected. All in all, although the indicator forecasts are still more optimistic than the Consensus forecast, there is a chance for a strengthening in the growth path, at least in the short-term.