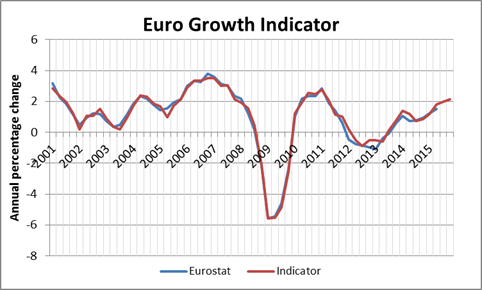 Recovery in the Euro Area, but until when?

According to the October EUROGROWTH indicator, the euro area will continue to grow at a rather sustained pace up to the end of 2015. GDP is expected to grow by 0.7 per cent in the third quarter and 0.6 per cent in the last quarter of 2015. The forecasts have been upward revised by 0.1 percentage point from the September estimation, suggesting that the growth path is still steady in the near term. The euro area should therefore experience the highest growth rates since the first quarter of 2011. On a year-on-year basis, growth should accelerate from 1.5 percent in 2015Q2 published by Eurostat to respectively 2 and 2.1 percent in the third and fourth quarters. Although the highest in four and a half years, these rates would remain below the historical standards and even below those recorded during the last upswing from mid-2009 to early 2011. GDP would grow by about 1.7 percent in 2015, which would be the best performance in four years.

The acceleration of growth in the third quarter of 2015 is driven by the lagged effect of the strong devaluation of the euro against the dollar which started mid-2014. However, the end of the downward trend of the euro in Spring 2015 will somewhat moderate this impact in 2015Q4. Survey in industry continues to support growth in the third quarter of 2015, as in the previous quarter, but this positive effect could fade away in the final quarter. The consumer survey is still suggesting favorable developments in private consumption, thanks both to the drop in the oil price since nine months which supported household’s purchasing power and to the gradual decline in the unemployment rate for about two years. With a long lag of more than one year, the construction confidence indicator still dampens activity in 2015Q3 but this effect is expected to turn positive in 2015Q4.

Currently, euro area growth is benefiting from the lagged effects of past temporary shocks, the drops in oil prices and in the external value of the euro since one year, respectively, but the resulting positive impacts will quickly come to an end. Further positive developments of the euro area economy in 2016 would therefore need a self-sustained process relying on private investment, employment growth, rising wage income and then private consumption growth. Such developments would be welcome while the risks for growth are becoming more and more obvious. The slowdown in emerging economies, especially in China, would dampen external demand. And increased volatility in the stock market emphasizes that risks for the outlook have risen.